In 24 of the 50 largest U.S. metros, buying a starter home now costs less per month than renting a similar-sized unit. As rents continue to hit new highs and mortgage rates remain low,  Realtor.com® released the numbers in its Monthly Rental Report for July last week.

“Sky-high rents and historically low interest rates have made the monthly cost to buy a starter home lower than renting one in nearly half the markets across the U.S.,” said Realtor.com® Chief Economist Danielle Hale. “Although it’s still hard to find entry-level homes, we are seeing more smaller homes coming on the market.”

With the future of remote work uncertain for many Americans, first-time homebuyers saw less of a frenzy than renters in a number of July’s highest-priced rental markets. This has helped keep monthly starter home costs an average 15.5% ($216) lower than rents in nearly half of the 50 largest U.S. metros. (See methodology below.)

In the top 10 metros–including Riverside, Calif.–that favored first-time homebuying over renting in July, monthly starter home payments were an average 24.3% lower than rents, driven in part by lower median listing prices ($192,000) than the national average ($297,000). The types of starter homes for sale also play a key role in monthly payments, with active inventory in these buyer-friendly metros including nearly two times the share of single-family starter homes (56.1%) than in condo-heavy markets that favor renting.

Many of these metros also posted sizeable rent gains over last year in July, led by Riverside (+29.7%), where the median rental price of $2,230 was 18.5% ($413) higher than starter home payments, at $1,817 per month. Even with the surge in prices, Riverside rents were relatively lower than in nearby Los Angeles ($2,742), making the metro an attractive option to big city renters looking to save during COVID. Compared to Los Angeles, first-time homebuyers in Riverside saw 51.5% lower asking prices and nearly three times the share of single-family starter homes, at 75.1% of entry-level inventory in July.

Typically some of the nation’s most expensive housing markets, big tech hubs largely favored renting over buying a starter home in July, partly attributed to higher condo HOA fees. Among 0-2 bedroom homes in these top 10 cities, over seven-in-ten (71%) were condos, on average, compared to 58% nationwide, while median HOA fees of $334 among homes that had this fee were 27% higher than the U.S. median ($263).

While rental prices have surpassed pre-COVID levels in the majority of U.S. markets, rents in many of the biggest tech cities have yet to catch up to historical peaks. Among the 50 largest U.S. markets, the only four where rents declined from last year in July were all big tech hubs: New York (-6.1%), Boston (-3.7%), San Francisco (-2.9%) and Chicago (-1.4%).

Leading the list of metros that favor renting by a wide margin, at $1,228 higher monthly starter home costs than rents, Austin is currently one of the nation’s most competitive housing markets. While costs like median HOA fees are relatively lower in Austin compared to other big tech cities, at $104 versus $1,222 in New York, first-time homebuyers are competing for limited affordable options, with 0-2 bedroom home inventory down 59% year-over-year and prices up 17.5% to a median $431,000 in July.

“Emerging tech hubs like Austin have seen a surge in housing demand in recent years as more Silicon Valley companies have opened or expanded offices in these areas. Relocating employees, including many millennials, can see their housing dollars go much further, with rental costs roughly half as high as in San Francisco and San Jose and starter home costs more than a third lower. With growth expected to continue in Austin, there’s a premium on real estate, but California transplants may find that relative affordability creates first-time homebuying opportunities,” Hale said. 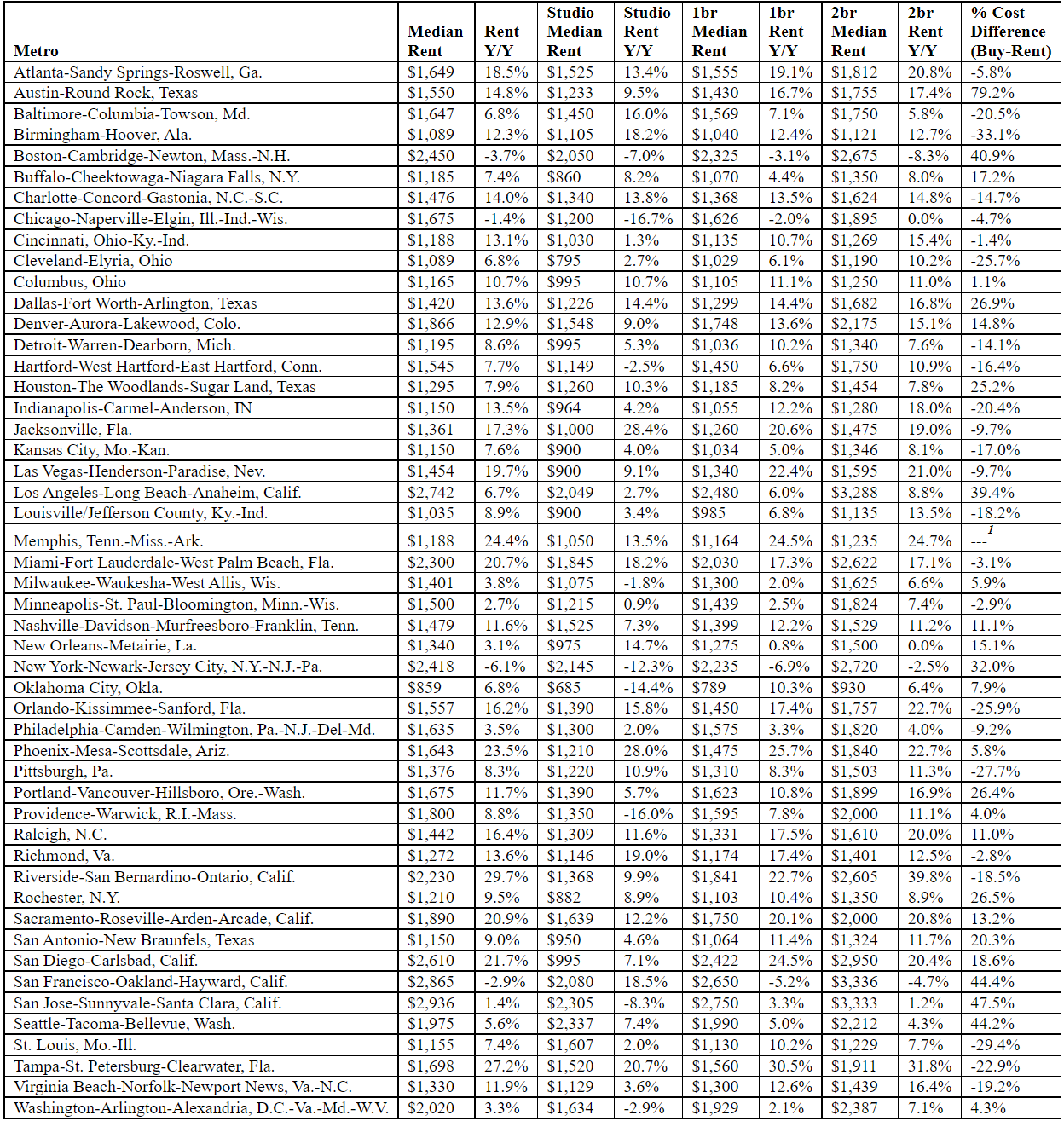 Rental data as of July 2021. Rental units include apartment communities as well as private rentals (condos, townhomes, single-family homes). All units were studio, 1-bedroom, or 2-bedroom units. National rents were calculated by averaging the medians of the 50 largest metropolitan areas.

The monthly cost of buying a home was calculated by averaging the median listing prices of studio, 1-bed, and 2-bed homes, weighted by the number of listings, in each housing market. Memphis for sale data was excluded while inventory data is under review. Monthly buying costs assume a 5% down payment, with a mortgage rate of 2.87%, and include taxes, insurance and HOA fees. Typical market-level monthly HOA fees were included in the overall monthly cost of buying, and the median was not conditional on the presence of an HOA fee. This means that the typical HOA fee included reflects both the fees themselves as well as the prevalence of HOA fees in the cost of local starter homes. All else equal, areas where more homes have HOA fees will reflect a higher HOA fee inclusion.