The housing market has rebounded from the low hit last spring during the worst of the coronavirus pandemic, the Department of Housing and Urban Development reported.

Sales of new and existing houses are driven by low mortgage rates and a desire by many to leave cities for the suburbs.

Lawrence Yun, chief economist at the National Association of REALTORS® (NAR), explained the market split to Newsweek: “We have clearly seen a bifurcated outcome in the housing market. People who can work from home or have exposure to the stock market have done well in 2020, but those in the front lines at restaurants, hotels and grocery stores who tend to be renters have not.”

Contributing to the Surge

He attributed strong sales to low mortgage rates and the ability of many to work from home. Mortgage rates are at their lowest level since 1971, when the Federal Home Loan Mortgage Corporation (Freddie Mac), began tracking them.

Yun expects the housing market to remain strong in 2021 because interest rates are likely to remain low. He believes employment will rebound with the development of effective COVID-19 vaccines, further increasing housing demand.

Yun said prospective buyers should stay within budget and consider a house in the outer suburbs – especially if work-from-home becomes a permanent feature in many jobs.

New home construction beat analysts’ estimates and rose to a nine-month high in November, the U.S. Census Bureau reported. Residential starts increased 1.2% to 1.547 million annualized rate from 1.527 million in October. The consensus estimate was 1.535 million new home starts. In October, home sales rose for the fifth consecutive month and continued one of the strongest runs in the market for several years, HUD said. 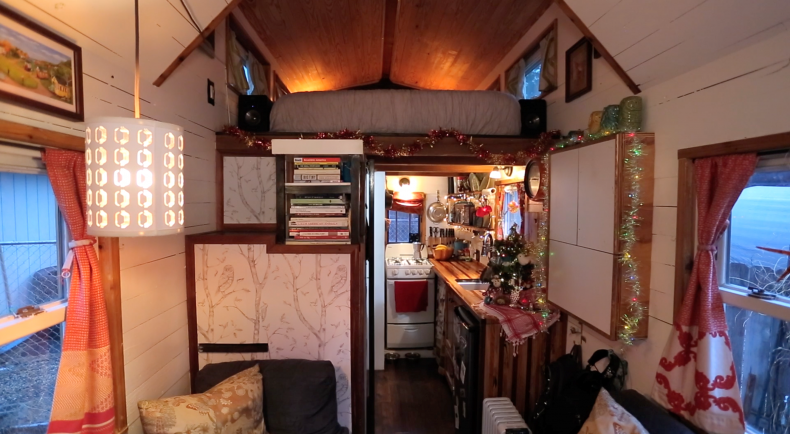 The interior of a tiny house.

A shortage of existing homes for sale has boosted demand for new construction. That could spur additional hiring in the construction industry and increased spending on materials, boosting employment throughout the supply chain.

The S&P Homebuilders Select Industry Index is up about 29.99% this year compared with about 13.93% for the S&P 500, a measure of 500 large companies listed on U.S. exchanges. Stocks of major homebuilders, including D.R. Horton, Lennar, PulteGroup and Toll Brothers have recovered from last spring’s lows and are approaching the strong valuations reached before the pandemic hit.

Purchases of new houses dipped 0.3% in October, to 999,000 units from September’s upward revision of 1.002 million. However, October’s sales were 41.5% higher than the same month a year ago, HUD reported. Sales of existing houses increased for the fifth consecutive month and remained on their strongest pace since February 2006.

“The strength of the housing market was consistent nationally – all 19 cities for which we have September data rose, and all 19 gained more in the 12 months ended in September than they had done in the 12 months ended in August,” Craig Lazzara, Managing Director and Global Head of Index Investment Strategy at S&P Dow Jones Indices, said in a report.

“A trend of accelerating increases in the National Composite Index began in August 2019 but was interrupted in May and June, as COVID-related restrictions produced modestly-decelerating price gains,” the report said.

“Our three monthly readings since June of this year have all shown accelerating growth in home prices.”