Latinxs–people of Hispanic, Latinx or Spanish origin–are becoming homeowners at a higher rate than the overall U.S. population, beginning to close a gap with the white homeownership rate that has tripled since the start of last century. Affordability and racial inequity combined to exacerbate the disparity that’s existed during the past 12 decades.

That means Latinx households carry a far greater share (64.7% vs. 38.1%) of their wealth in their homes–which caused those families to be harder hit by the Great Recession. 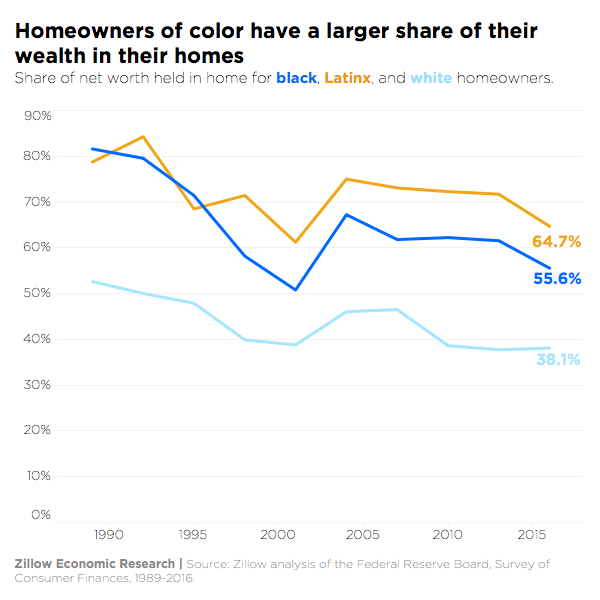 White homeownership soared during the ensuing 100+ years, from less than half (48%) of white households owning homes in 1900 to more than 70% currently, but the Latinx homeownership has remained largely flat over the same time–rising from 40.2% to just 47.4%. While it’s difficult to pin that disparity on discrimination alone, it’s clear that the threat of discriminatory actions–whether overt or more subtle–weighs heavily on the Latinx community.

Discrimination and inaccessibility pose problems around finding a home for many Latinxs, whether they rent or own: 16% of Latinxs say they’ve been treated differently in their search for housing because of their race.

Of all the homes foreclosed upon between January 2007 and December 2015,[2] 19.4% were in largely Latinx communities–higher than the 12.7% in predominantly black areas. That’s particularly high when considering  just 9.6% of all homes in the country are in Latinx neighborhoods (7.7% are in black communities). By contrast, only 66.4% of all foreclosures were in predominantly white areas, a far smaller share than the 81.2% of all homes that are in white communities.

In 2007, near the height of the housing bubble, a home accounted for 73.1% of the typical Latinx homeowner’s total wealth, compared with just 46.5% for the typical white homeowner. Because their homes accounted for a much larger share of Latinxs’ household wealth, they had fewer outside assets to draw on when home values plummeted–often resulting in foreclosure when the value of their home fell below the balance on their mortgage.

People who go through foreclosure are typically prevented from buying again for seven years, which meant many Latinxs missed out on the post-recession rebound in home values.

The picture is not much prettier for Latinx renters.

Households earning the median Latinx income could afford only 27.3% of rental listings nationwide in 2017. By contrast, households earning the white median income could afford 49.7%. Even when they stretch their budgets well beyond the point of traditional affordability, it’s difficult for Latinx renters to find a place to live in many metro areas.

And the typical rent increase for Latinx renters is $200 a month, compared to $150 a month for white renters, according to the 2019 Zillow Group Consumer Housing Trends Report (CHTR), a survey of more than 10,000 market participants. They’re also more likely to be hit by rental application fees: 73% of Latinx renters paid such fees, compared with 56% of white renters.

Affording a mortgage is slightly easier, but only for people who can come up with a sizeable down payment. With a median income of $47,990, Latinx households could have afforded a $314,505 home in 2017, enough to theoretically afford 64.9% of all U.S. listings that year assuming they were able to produce the 20% down payment. That compares with 77.6% of white households.

Mortgage denial rates among Latinxs are falling. They dipped to 15.5% in 2016 for conventional loans, which was below even housing bubble denial rates. Still, that’s nearly double the 8.1% denial rate for white mortgage applicants, which is likely due in part to differences in income, debt levels, credit scores and savings. But it’s impossible to completely disentangle the effects of those economic factors from the effects of race and the impact of historical discrimination of all sorts.

Clearly, the work isn’t over—nor is the Latinx community shrinking away from homeownership, despite the difficulties and uneven playing field. Latinxs are the most likely ethnic or racial group to think about buying a home – 77% think about it often, compared with 73% of blacks, 68% of Asians and 65% of whites.

[1]For this table: Median household income data comes from the U.S. Census Bureau, American Community Survey, 2018; median net worth/wealth data comes from the Federal Reserve Board, Survey of Consumer Finances, 2016. Note: The only identifiable races using these data are white, black, Latinx and other.

[3]Foreclosures between January 2007 and December 2015 encapsulate the period when foreclosure rates were highest. Prior to the bust, U.S. median home values peaked in May 2007, but the peak was earlier in some markets. Similarly, even though the national housing market bottomed out in February 2012, the impact of the bust and recession lasted much longer. Homeowners who attempted to hold onto their homes throughout the recovery were sometimes unsuccessful, which continued the trajectory of steady foreclosures through 2015. In 2016, foreclosure rates began to level off, signaling the end of the foreclosure crisis.